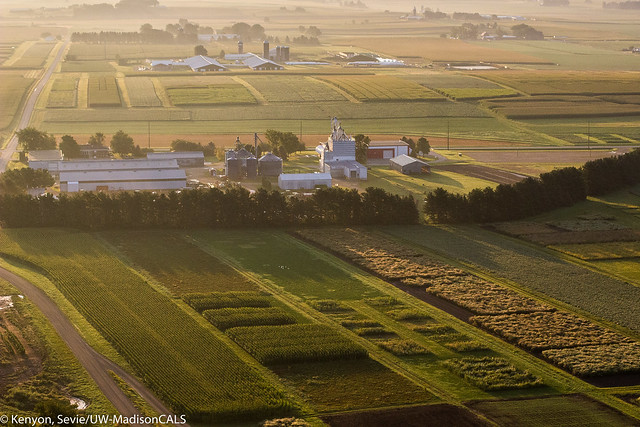 Dawn over the Arlington Agricultural Research Station was gorgeous; warm light with long shadows texturing the landscape. Then we turned the helicopter north toward the Hancock Agricultural Research Station to complete the second phase of the aerial photography session. Ahead we could see clouds and fog. Pilot Eric Peterson of Fly High Helicopters told us earlier that Stevens Point Airport was reporting zero visibility. But Hancock is 30 or more miles from Point. Besides, this it fog. It burns off, blows away, dissipates. Right?
The atmospheric moisture increased steadily as we progressed north. Over Portage the view was broken with interesting sunlight poking through gaps in the clouds. Then suddenly there was no view at all. “This isn’t good,” Eric said, in as matter-of-fact way you could make such an announcement. “Look for a road. They usually don’t build towers on roads.” Towers?
We went lower, looking for the ground. A north-heading road appeared below and we followed it at treetop level. “We have to get out of this. We’re going to climb,” Eric explained to myself and passenger Phil Dunigan, assistant research station director. Up we angled up into bright, featureless, invisibility. After a long climb the helicopter came out and the first thing visible to the left was the top of a tower. “Let’s look for a place to land. Any field or open area will do,” Eric said. 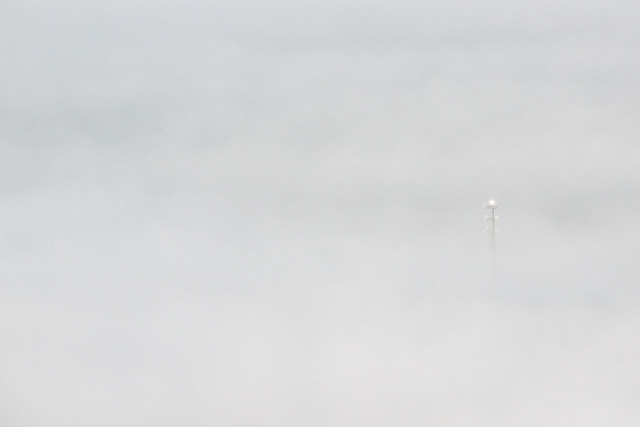 Using the instruments, we nudged over Interstate 39. We could see the highway once in a while as we looked for breaks in the fog big enough to drop into and find a landing spot. At Westfield, the fog parted to reveal the Pioneer Inn and its ample parking lot. Eric wiggled the helicopter down through the fog and past the light and utility poles to a soft, safe landing on the far north end of the parking lot.
Sensing we might be there for a while I jumped out of the helicopter and went into the Pioneer. Employees and customers alike had piled up on the window facing our side of the parking lot. Speculation was in the air. A police car had pulled up near the grounded helicopter and the officer was talking with Eric as I walked back. “Isn’t there something illegal about this,” chief of police said. “You’re the cop, you tell me,” Eric said. The chief, Louis Rudolf, was a nice guy and we visited then said good bye and went into the Pioneer for coffee and breakfast.
Once we could see, we lifted off to finish the flight over the research station. But it was still cloudy with close, heavy haze making pictures hard to take. Again we landed and went into the Hancock station to check weather and figure out if we should wait or head out. The sky kept getting darker and more threatening. But we could still see. “Let’s just get out of here while we can,” I said. The three of us got back in the helicopter and took off for home. We lifted off and flew over a huge field of sweet corn that you could smell in the wet air. By the time we got back to the Baraboo Airport it was a beautiful day.