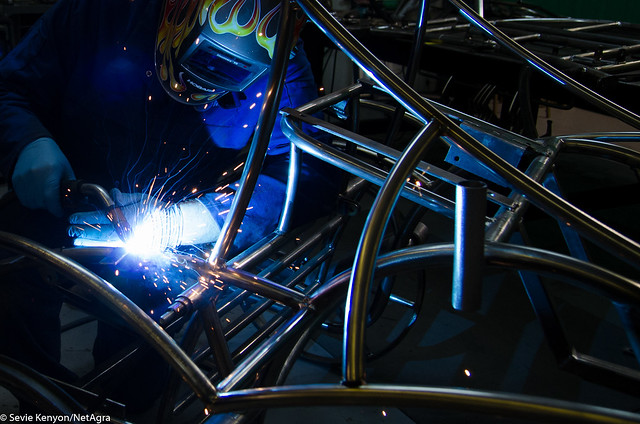 The opportunity to take some welding pictures presented itself rather abruptly while on a photoshoot for The Country Today. In other words, I’d done no prior research so I was going to need to wing it for exposure settings. I knew what I wanted for an outcome, but had to take pictures based on my gut and some trial and error.

Safety first. You can’t look at an arc welder or it’ll burn your eyes right out. High intensity UV light is the main culprit. Keep in mind you have a tiny light source that’s brighter than the sun. The message here is that you’re not able to stare at the process through the viewfinder. A live view display may still line you up with the light so a tethered computer/tablet is a better potential option but I didn’t have one. Sparks fly, too. Might mar a lens if it’s too close or even burn you.

What I wanted is for the arc light to be the main illumination and for the surrounding shop to be mostly dark. Didn’t hit that as well as I wanted because I went with an open aperture at 3.5. If I get another shot one day I’ll squeeze that down but I was thinking shallow depth of field on the welder’s mask and a rapid 1/320 shutter speed to get some blurring with the flying sparks at ISO 500. And, I had to put the camera on a tripod, pre-focus, and trigger the shutter with a remote or the timer. Went with the remote because I could snap away and not be close to the action.

My welder was very cooperative about the process and was able to repeat the weld several times. But once we got going, he had only so many welds he could make before it was over. Each new weld also meant a sight change in camera position and focusing. We’d readjust, he’d ask if I was ready, he’d weld, I’d push the shutter. The welds were short runs of a few seconds each.

If I ever set out to take welding pictures again, I’ll want a smaller aperture to focus the point of light more and a slower shutter speed to perhaps get more implied motion in the flying sparks. Don’t think I’d go below about 1/60 because I still want the welder to remain sharp and the welder will move some during the process. Given some time, I might fool around with some neutral density filters, but not sure about that yet.

Back in my shop I did some cropping and tweaked the light to darken the background. There probably are a million ways to take this picture and I doubt I’ve written the last word. I did want a head on shot like I have, but looking over the shoulder, or even directly behind with a silhouetted person welding also would be fun and dramatic to pull off. And you could close things down further and add some highly directed flash to further intensify the image. Adding the flash is something I’d like to try.