The base hit photo 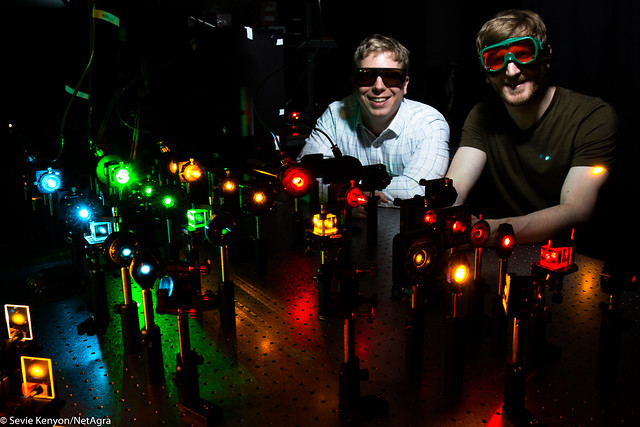 When you’re sent off on an assignment, you’re not likely to have much control when you get there. Time often is limited, too; sometimes only a few minutes. You get there, you go in, you improvise, and do the best you can.

Our two scientists here with their laser microscope is a case in point. Before I went in I had at least seen a couple of iPhone images and some pictures on the lab web page. The situation also was described to me so I had more information than is often the case.

The idea was to get a picture of the researcher with the laser microscope. When I got there, of course, I learned I needed to include his associate in the photo as well. It was dark and it was cramped as expected. There are a number of approaches I’d considered. One was to try to use the light from the lasers to illuminate the researcher’s face. The color might be a decent effect.

Then, I thought about jacking the ISO setting up and use all available light. But I scratched that thought right away. Too many drawbacks. So what I settled on, as my plan going in, was a time exposure for the laser light and add flash to light up our scientists. You need a flash, maybe two, and remote triggers which I have in the kit.

Squeezed in, farted around for a while with light readings and trial and error, then started. Unfortunately, we had to wear protective eye wear adding to the challenge and obscuring their faces no matter what I did. Each picture was a 30-second exposure. The guys were great about it and stayed at it longer than they should.

Finally, we had to call it a wrap. This is the base hit part. As I go over the situation after the fact I know there are dozens of things that could be done differently and better. There are things I don’t like about the picture. On the other hand, it covered the assignment producing all the elements the editor had asked for. Base hit. In baseball, people can make good careers by routinely hitting base hits.

And, when you’re in the game swinging, you never know when you get a chance to drive one over the wall.

Follow
This entry was posted in Uncategorized and tagged basehit, editorial, experience, flash, how to, magazine, photo, science, time exposure. Bookmark the permalink.