Whenever I get around the sites and artifacts of ancient peoples, I’m conflicted with both wonder and rue. Aztalan State Park encompasses the ruins of a native American culture. Based on the Wikipedia accounts, some of the village’s wooden stockades were still standing when the first white people turn up. Likewise, the mounds and other structures were visible and in place. 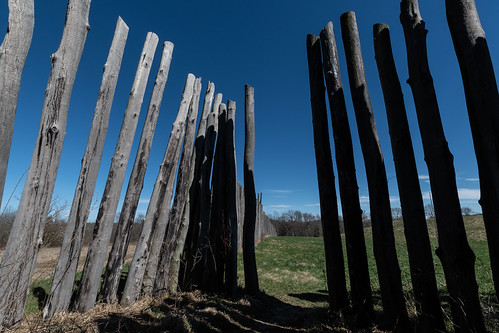 You can fill in the blanks after that. A few people fought to save what they could. Other people leveled off mounds for farming and carted away the materials there for filling road potholes and the like. Much of the place is preserved and replicated somewhat offsetting the overall loss.

A sense of wonder and mystery pervades the site. The “Princess Burial” is one of the most high profile mysteries at Aztalan. Native Americans still protest that the remains be returned.

School kids visit Aztalan by the busload and people from all over the world with interest in ancient people find their way to the site. It’s a small place; perhaps 20 acres. Aztalan makes for a mystical stroll. Informational kiosks placed along the trails are helpful if somewhat intrusive. And, of course, like all state resources, the site is under constant budget assault.